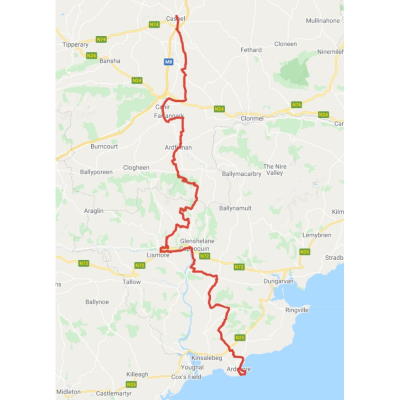 Saint Declan’s Way is a pilgrim walking route linking Cashel in County Tipperary and Ardmore in County Waterford. It follows the route that Declan took when going to Cashel to meet Saint Patrick in the fifth century. In turn, it is the way that Pilgrims have taken to visit Saint Declan’s monastery, holy well and grave in Ardmore for the past one and a half thousand years.

The trail begins at the car-park of the Rock of Cashel passing through Cashel, Cahir, Ardfinnan & Goatenbridge in South Tipperary. It then crosses the Knockmealdown Mountains into West Waterford going through Mount Melleray, Lismore, Cappoquin, Aglish and finishing at St. Declan’s Monastery in Ardmore, Co. Waterford.

Anyone who wishes to walk the route can now follow the Blue Waymarkers (with added SDW Duibhín Deaglán Navigation arrows) to negotiate St. Declan’s Way from Cashel to Ardmore or vice-versa.

The St. Declan’s Way Committee, a voluntary group with representatives from along the route, having been working since 2015 to revive this ancient pilgrim path.